This lady had only 5 teeth left in her lower jaw and she had been wearing a lower partial denture which she could never get used to. 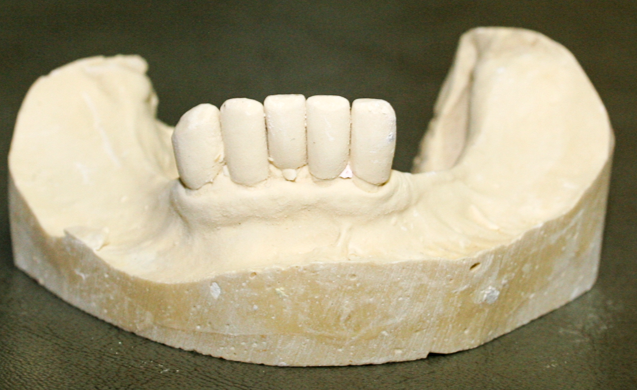 The first step in planning how to handle this case was to do a 3D bone scan.

In this case we decided to place each pair of implants two months apart. That way the patient could wear a partial while some of the implants are healing, and preservation of the bite and the vertical dimension will be easier to achieve.

The first two implants were surgically placed with local anesthetic.

Two months later we had perfect healing and healthy gums. We are getting ready to place the next two implants.

After the second set of implants we then placed the third, most posterior, series of implants. During all those phases, a partial denture can be worn so long as the healing implants do not touch the base.

RESTORATIVE PHASE – After 3 months of healing, the respective implants can receive bonded abutments and impressions are taken for crowns.

The first two sets of implants on either side are restored with a splinted set of three crowns in order to keep proportions and to aid in stability.

The third set of implants is restored with single crowns. The patient is officially restored and does not need a denture any more.